It’s your turn. Three simple words that strike a mixture of dread and exasperation to parents everywhere at Christmas as they scramble the internet for fresh Elf on the Shelf ideas. Without thinking it through, I committed to a Frozen Elf on a Shelf idea.

This is my big gripe with elf on a shelf, the constant battle to be new and unique to keep the magic, when all you want to do is go to bed. Instagram and Pinterest are full of amazing ideas with beautiful execution.

It was a mistake to freeze an Elf in a block of ice without research, so I thought to help someone else making the same mistake. People can make it look so easy with simple instructions of a zip lock bag and a cup. But it’s worth reading this guide before you start.

Firstly, it takes time and prep work. Water takes 1-2 hours to freeze for a small ice cube at zero degrees. So big containers take a lot longer, so you need to get started with enough time to counter any unexpected issues. Even with the freezer on -25 degrees power freeze, it took hours to get this done.

I finished this at 2am, so the presentation is lacking somewhat, but this is intended as a practical guide on how to do it and what not to do rather than showing off the lack of artistic creativity.

Things to know before you start:

How to solve the elf floating from trapped air

I used a Tupperware box with the lid off to freeze quicker, and I froze a small amount of water on the bottom to hold it into place. Be warned, pouring extra water on top can melt the ice so it is better for it to be fully frozen or to have chilled water beforehand. Alternatively, you can take it out and fill the bottom up with water and put it in upside down.

You can try weighing it down, just bear in mind you need to catch it before it fully freezes or it will be frozen in.

What happens if water gets in?

This happened and it was one cold wet elf inside. After a trip in the tumble drier in a sock with the washing, it came out dry. The water inside didn’t actually freeze.

How do you get it out afterwards?

I put the Frozen Elf on a Shelf in the microwave for 2 minutes and was then able to break it out. This left a shell that I used to stage an escape when backs were turned. Perhaps a school day would have been a better choice in hindsight to give more time to do this. 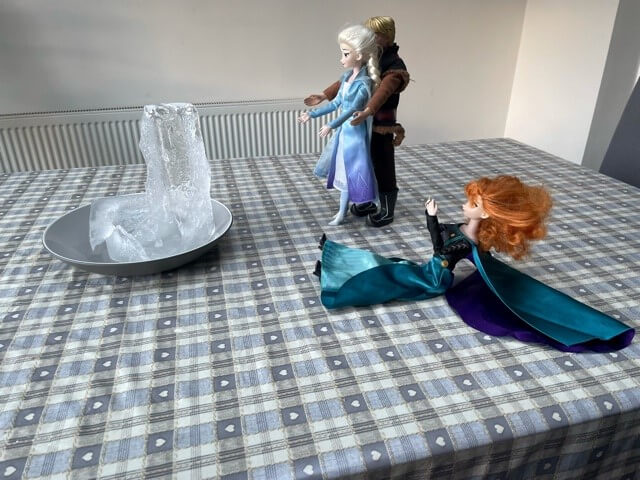 How long does water take to freeze?

It varies based on temperature and volume of water. Just be wary that if you take it out too soon, it will ruin the clarity unless fully frozen.

What is Elf on the Shelf?

EOTS is a Christmas tradition popular in the UK and USA involving toy elves staying with a family in December. Often they arrive with the advert calenders on the morning of the 1st and depart Christmas Eve. The idea is they are monitoring behaviour and reporting back to Santa in the North Pole for the naughty or nice list. This enables some parents to use a variation of Father Christmas is always watching so you need to behave.

It began life as a 2005 Children’s book by US author Carol Aebersold, where a magical scout elf would stay for the day, report back to Santa, and then return in a different room and spot in a game of hide and seek. As a parent, that would be fine but the game has twisted into one-upmanship on who can think of the funniest ideas for elf mischief.

Annoyingly for the adult, children voted it one of their favourite parts of Christmas to muscle in as a vital family tradition. And of course, you can’t recycle previous efforts, leaving many late-night internet searches in desperation for inspiration.